The pollution of surface and ground water in the course of mining activities is one of the largest and most costly environmental problems worldwide. Especially the oxidation of omnipresent sulphide minerals such as pyrite leads to the release of iron, acid, sulphate and associated heavy metals in harmful concentrations (so-called "acid mine drainage"). The successive neutralisation of the mine water leads to the precipitation of iron hydroxides (so-called "ochreification") and thus to a reduced usability of water resources and a complete destruction of aquatic ecosystems far into the receiving water.
The object of the research project is the research and further development of a passive-biological water treatment technology to reduce the effects of mining on aquatic systems. For this purpose, an innovative, multi-stage pilot plant was implemented at a suitable project site in the former Upper Palatinate lignite mining area and operated for several years. By varying critical system parameters, it was possible to obtain unprecedented comparative data on the operation and performance of the environmentally friendly system under real conditions. In addition, special large-scale column experiments were carried out in the laboratory to investigate and quantify the critical processes of natural iron removal.
The focus of the investigations is the development of a scientifically founded, application-oriented design approach for passive systems based on the kinetics of relevant processes. In addition to the universal design approach for the German and worldwide transferability, a tailor-made scaling for the local application is to be carried out in order to install the first large-scale passive-biological plant in Germany as a "lighthouse project" at the project location. In this respect, the overall objective of the project is to contribute to the environmental and socio-economic consequences of active and, in particular, aftercare mining by optimising and introducing sustainable technology in Germany. 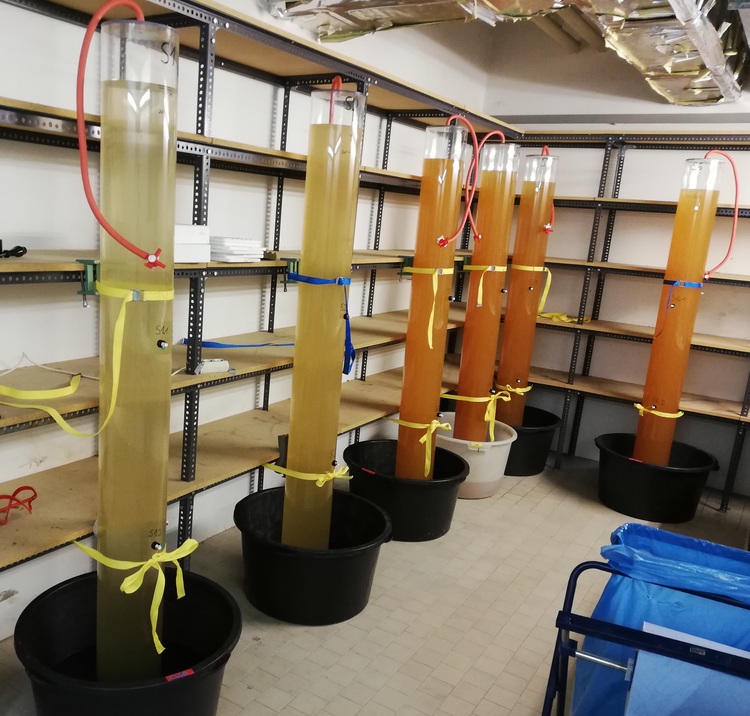